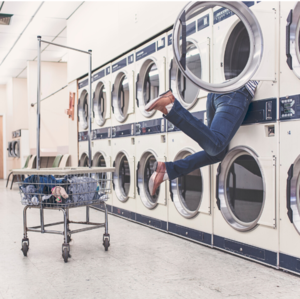 When my son Joel recommended a movie called the Laundromat over the holidays, I didn’t immediately find it on Netflix and watch it.  I couldn’t quite see why a movie about a Laundry would be of interest to me.   I do not profess to being a keen housewife, and I certainly don’t iron undies!  When he followed up to see how I liked the movie and told me it was about the Panama Papers, he caught my attention.  Like the true nerd I am I had to watch this movie.

Now this movie is not for everyone. I know you may be thinking, what the hell are the Panama Papers, but for tax nerds like me, this is our type of story about scandal & corruption.  The Panama Papers were documents leaked to the press and releases to the world in April 2016.  Effectively someone at the law firm Mossack Fonseca in Panama leaked 11.5 million documents containing all the juicy details of its client’s offshore dealings to hide money and avoid taxes.  The fact that many of the names leaked were recognisable, including criminals and politicians such as Putin, added extra substance to the story that followed.

Although the definitions about tax avoidance talk about tax shelters and multinational companies, I believe tax avoidance is what many Australians do, avoid paying taxes?  Much of my job is around finding the legal means for my clients to pay the least tax possible.  Anyone who is negative gearing a rental property is avoiding pay tax.  Few Australians who grapple with the morality of this type of tax avoidance.

Avoiding tax has been around as long as tax has existed.  It is in our human nature to find a way to minimise the amount of tax we need to pay.  In 1696 a tax on windows was introduced in England and Wales because the bigger the house you had, the wealthier you must be.  A count of the windows was a simple solution to measure the occupant’s wealth.  Tax avoidance saw property owners blocking up windows or having one window that spanned two rooms to reduce the tax payable.  Interestingly enough, this is where the term “daylight robbery” originated.  Tax avoidance is not new, it has just become more complicated.

I am guessing you don’t have a copy of the Australian Tax Act in your bookshelf, but it is a massive piece of legislation.  In fact, there are a number of pieces of legislation that make up our tax laws, including two parts to the main legislation enacted in 1936 and 1997.  The tax legislation is an evolving beast with much of the legislation devoted to closing up the loopholes clever accountants and lawyers find to help avoid paying taxes.

So if tax avoidance is not illegal, why doesn’t everyone take advantage of tax shelters, and what is a tax shelter anyway?

Keeping it simple, to create a tax shelter a company sets up its business in a country that has a better tax rate than its own.  Australia’s company tax rate ranges between 27.5-30%.  The company tax rate in the US was 35% until Trump cut it back to 21% in 2017.  Ireland has a company tax rate of 12.5% but extra advantages reducing the rate to 6.25% for revenue tied to patents or intellectual property.  You can see why tech companies like Apple have strong interests in Ireland.  The subsidiary in the tax shelter country charges higher prices to the company operating in the home country, moving the profits to that lower tax country.  In Australia we have rules about “transfer pricing” (that is what it is called), to ensure that profits made in Australia are taxed in Australia, but it is a challenge for our authorities to monitor.  Although it seems contradictory, charging a lower company tax rate can be very good for a country as it encourages businesses to move to that country to operate.  The tax is picked up by providing jobs to people in that country who pay tax.  Apple do have employees in Ireland but without doubt it was a strategic decision to operate out of Ireland to save tax, not just because they love the rolling green hills and the Irish pubs.

Not everyone has the ability to just set up an operation in a tax haven.  Instead, they set up a shelf company in a tax haven and channel their investments through this.  A country like Panama offers no taxes for foreign companies, and it has privacy agreements that prevent it from sharing information with other tax jurisdictions.  It is the perfect place for money to be hidden from the tax authorities.  It is also the perfect place for criminals to hide their money.  The lines between tax avoidance and tax evasion start to blur.

The reason we don’t all set up tax shelters is that it is extremely expensive and few of us make enough money to see any benefit.  We have other ways of avoiding tax (legally) in Australia such as negative gearing.  Also, for many of us we feel we have certain moral obligations to contribute taxes to our country.  Without taxes, the country would not operate.  Although we hear stories of our taxes being wasted on things we feel are not useful, the vast majority of our taxes are critical to maintaining infrastructure such as schools, hospitals, roads and defence.

Next time you are coming up with a scheme to reduce the amount of tax you pay, think about it and work out whether it is tax avoidance of tax evasion.  Just a little hint, taking cash money and not declaring it is tax evasion.  It is illegal, and the days of hiding that money from the authorities are drawing to a close.  There are many examples of small scale tax evasion that we see every day, much of it that would not be detected by the authorities.  Technology and tax legislation will continue to evolve to stamp out both avoidance and evasion, putting all tax payers on a level playing field eventually.

If you are interested in the Panama Papers or tax in general, I suggest you nerd out for a few hours and watch The Laundromat simply to understand what it is all about.  Another similar recommendation is The Big Short which is about the US loan market practices that lead to the Global Financial Crisis.  Both movies take something really complex and break it down to something a little easier to understand.  I know it is not everyone cup of tea so I am not recommending it to those who would prefer to watch Married at First Sight or the Real Housewives.  Although secretly, I enjoy watching those too.

Let us take the puzzle out of your tax needs.

A matter of Trust

We may request cookies to be set on your device. We may use cookies to let us know when you visit our websites, how you interact with us, to enrich your user experience, and to customize your relationship with our website.

We may request cookies to be set on your device. We use cookies to let us know when you visit our websites, how you interact with us, to enrich your user experience, and to customize your relationship with our website.

Click on the different category headings to find out more. You can also change some of your preferences. Note that blocking some types of cookies may impact your experience on our websites and the services we are able to offer.

These cookies are strictly necessary to provide you with services available through our website and to use some of its features.

Because these cookies are strictly necessary to deliver the website, you cannot refuse them without impacting how our site functions. You can block or delete them by changing your browser settings and force blocking all cookies on this website.

We also use different external services like Google Webfonts, Google Maps and external Video providers. Since these providers may collect personal data like your IP address we allow you to block them here. Please be aware that this might heavily reduce the functionality and appearance of our site. Changes will take effect once you reload the page.